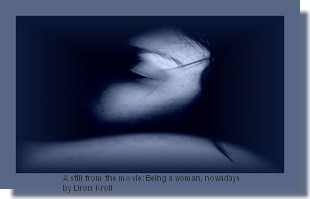 It was late. Sprawled in bed
a fantastic dream before her spread.
In groping madness, she thought she was awakened
but found herself in an awful state . . .
sleeping within a morbid death surround.
She heard sickening sounds:
-slumping there, a man with one arm dangling;
-then a fellow bellering, his wife he was strangling;
-wailing, another in greatest agony of defeat;
-still another man slipped and lost both his feet.

She entered. She was a girl of seventeen . . .
thrown into a life of meaningless in-betweens;
dressed in rags, pieces sown together by a doll maker's hand.
She stood on streets and sold pennies for pieces of candy.
You didn't know her and neither did they.
She was invisible, just easy prey.
She combed her hair with fish vertebrae and watched shoppes close
and hadn't a live long place for her body to go.
She slept with cats and held her belly taunt til it felt full
and when she looked up you called her something cruel.

She decided she was not going to dream such things
so grew she wings and flew over snow water streams.
She saw blue-ridged valleys with fields of wheat unshaven
and beside her flew minions of ebony clothed ravens!
She heard a fife, drum and bagpipe play a dirge,
then the birds ebony gathered to submerge
in noisy flappings toward cumulus clouds of gray.
She decided it was just all too fantastically cliche!
Toward zenith she verged, leaving demons to creep
in still deeper sleep.

She moves to left side

<< Trope
Or perhaps another category of poems?
Kids - Feminine - Inmorata -
Humor - Agape - Nature
Miscellaneous
_________________
'Fill your paper with the breathings of your heart.' William Wordsworth